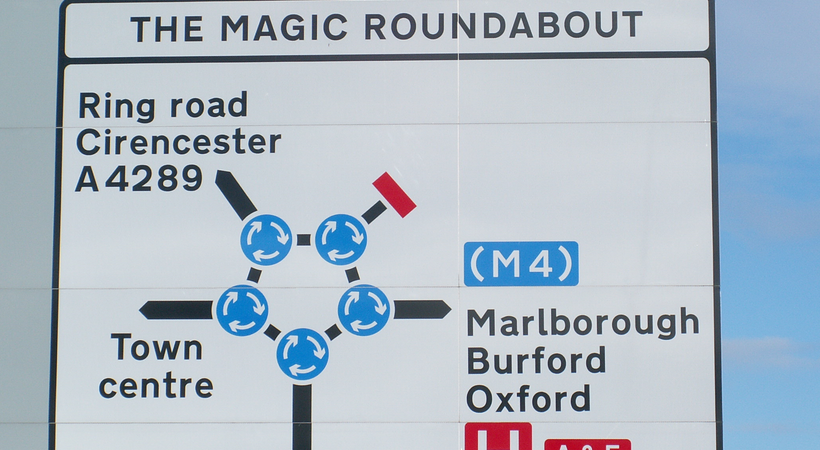 You could be forgiven for thinking that road signs are meant to be helpful. Don’t worry, we’ve all been there. It’s number four in the list of life’s greatest disappointments – right under Father Christmas, the Tooth Fairy, and that furry weirdo with the chocolate eggs.

Not everything can be as simple as finding a place to park. The sooner we accept this grim reality – that the majority of road signs are actually a ploy to thwart the Commanders of the Alien Invasion when they eventually, inevitably, land their spaceships – the sooner we can get back to the important task of pretending we understand what “sport mode” means.

Here’s our pick of 12 road signs that will have you laughing till you cry. Or probably just crying.

12. No worries, we’ll ask the hitchhiker if he wouldn’t mind putting his meat cleaver away and napping for a few hours.

11. A thing of both staggering beauty and impenetrable mystery, the Magic Roundabout in Swindon is a place where logic and reason go to die. Word on the street is that there’s a friendly troll living in that little red house at the end of the third exit.

10. This dude has an umbrella, and GOSH BE DARNED, he is not afraid to use it.

9. Oh, cool. Well in that case, my credit card bill isn’t in use, and neither is my migraine or my ironing board.

8. Beware! When those pesky man-eating cows are on the moo-ve, it’s time to activate your in-car lightning thrower.

7. Look, the point is, you’re supposed to throw enchanted beans in the air and take an average of the sum of marshmallow and then subtract seven and travel at the speed of whichever of these two numbers isn’t closest. Driving in Australia really isn’t that hard.

5. Is it a bird? Is it a plane? No – it’s an arrow that’s pointing in completely the wrong direction. Top marks for effort, arrow.

4. “La la la la I’m not listening.” Forget the weather and the cuisine, it’s this sort of crushing misery that forces the Brits to emigrate to the Costa Del Sol. (Part of us hopes that these road signs are guerrilla marketing for the Channel Tunnel.)

3. This one’s like a cryptic crossword clue – except that you know there will be no eureka moment here. There will be tears before bedtime, permanently damaged vocal cords, and maybe the breakup of a harmonious twenty-year marriage.

2. Does anyone here have a PhD in semiotics? Or a PhD in how to resist breaking stuff in the face of such pointless adversity?