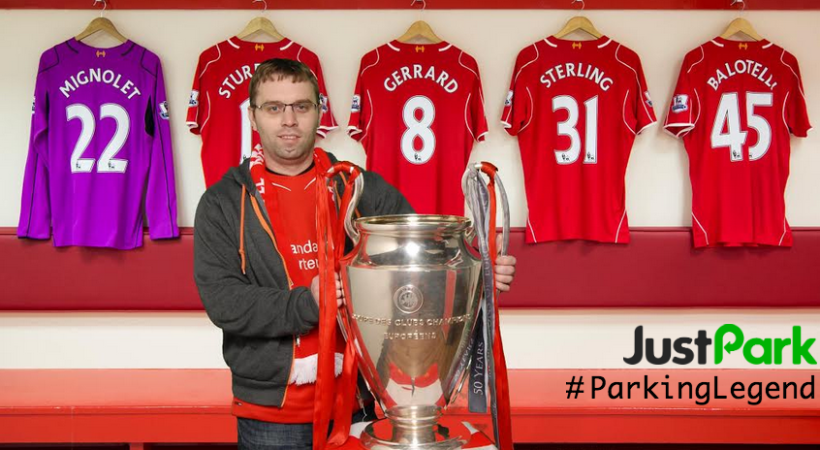 At JustPark, we love celebrating our wonderful, eclectic mix of drivers. This week our community champion Sam Mellor takes a peek into the high-octane life of the travelling football fan and the unwavering commitment to the chosen team that goes with the territory. Here are 5 certified #ParkingLegends who found some space, picked their spot and secured 3 points (well, hopefully not on the licence)…

Die-hard Liverpool fan Steve uses JustPark every time he makes the gruelling journey from Cornwall to Merseyside to watch the mighty Reds play at home.

The Paradise Island Bingo Hall and Social Club rents a number of its spaces only a ten minute walk from Anfield, and they’re always packed with Liverpool supporters eager to see a victory in front of the Kop.

Steve says the greatest perk, aside from the cheap price tag – £1.30 per hour or £7.50 per day – and handy location, is that the guys who run the bingo hall let him use the gents when he arrives and when he sets off home again as well. Always a bonus when you’ve got a 5-odd hour journey ahead of you.

Liverpool may have only been a generous 7/10 so far this season, but Steve finds his parking more reliable and far more cost-effective than Mario Balotelli, giving JustPark a league-topping 10/10.

Another footy follower who travels a fair distance to Merseyside by car is John Moran, whose son is a dedicated Liverpool supporter. Here he is brandishing the iconic red scarf in the Kop end like a true fan:

John found a great space just minutes from the ground which lets him get away quickly and easily after the final whistle, making the 230-mile drive home just that bit more bearable, especially after a defeat.

We’re here for you John. One thing’s for certain – You’ll Never Park Alone.

Journey: Wiltshire to the Emirates

Despite being a Tranmere Rovers fan, Wiltshire-based Lee Fenn regularly travels to North London to take his boss to watch the Gunners play at the Emirates. The drive takes about 2 hours 15 minutes, and the boys go to games twice a month (so about as regularly as Theo Walcott gets injured).

Lee scouted some parking talent just minutes from the ground and made a great signing in the form of this lovely space, which he uses every match.

I’m sure he’s far more likely to see quality football from Arsenal than the Rovers, but you’ve still got to value the commitment! Let’s hope he gets that promotion, eh…

Journey: Bristol to the Emirates

Mark Renshaw is actually an Arsenal fan. He drives from Bristol to the Emirates whenever he can get his hands on tickets to see the Gunners.

A bit apprehensive when he first used JustPark in unfamiliar London, Mark has now made 8 trips with 8 parking victories, which is a champions’ record if ever I’ve seen one.

Mark reckons his JustPark app is handier than Alexis Sanchez in front of goal, and it scores him a great deal on his parking for every visit – he says he no longer needs to consider train or tube delays, which is one less thing to worry about after a long journey and the game result.

Are you listening, Jose? Don’t just ‘park the bus’… JustPark your car.

For Spurs fan John East, it really is end-to-end stuff. He’s a season ticket holder who travels from Newbury to White Hart Lane for every single game.

John found out about JustPark from across the sporting boundary, having a friend who uses the service to park for cricket matches. Given the dastardly parking restrictions in place around White Hart Lane on match days, John thought he’d give the parking app a whirl and hasn’t looked back since. When it comes to finding and booking a parking space now, John is as prolific as striker Harry Kane and can focus his stresses entirely on his team’s performance.

Unfortunately we don’t have a photo of John donning the white strip of Tottenham – he says he’s been supporting Spurs for 54 years and in all that time has avoided wearing the kit, leaving that to the players on the pitch.

Wise words from a hardcore #ParkingLegend!

Whether you’re off to the match, visiting far-off relatives in some distant town, or pootling to work on a daily basis – our handy pre-bookable spaces are always waiting to welcome you with open gnome arms.